Mr. Younts gave excellent personal service, answered all of my concerns… I would most definitely hire him again and encourage others to hire him for his expertise and excellent work….

If you’re charged with a crime in Pennsylvania, in a federal court, or as an active member of the military, you’ll need an attorney who is respected by his colleagues and has extensive legal experience. Since 2002, Lemoyne criminal defense attorney R. Davis Younts has been protecting the rights of the accused and fighting for justice on their behalf.

As a military defense lawyer, R. Davis Younts represents defendants on active duty who are charged with violating the Uniform Code of Military Justice (UCMJ), and he helps veterans obtain discharge upgrades and military records corrections.

A CRIMINAL DEFENSE LAWYER YOU CAN COUNT ON

Being charged with a crime doesn’t have to ruin your future, but it can. Even a first misdemeanor conviction in Pennsylvania can result in a jail term, a fine, and a criminal record. But being prosecuted for a crime doesn’t mean that you’ll be convicted. To win a conviction, the state has to prove your guilt beyond a reasonable doubt. Lemoyne criminal defense attorney R. Davis Younts knows how to tell your side of the story and cast doubt on the state’s case against you.

If you’re charged with a drug offense, a sex crime, a white-collar crime, a crime of violence, or even a traffic offense, contact attorney R. Davis Younts. If you’re targeted with a restraining order, accused of violating probation, or named in an outstanding arrest warrant, he knows what steps to take and how to protect your rights. Attorney R. Davis Younts fights vigorously for justice on every client’s behalf.

All Charges dismissed in Sexual Assault case at Andrews, Air Force Base, Maryland. Lt Col wrongfully accused of sexual assault was vindicated through careful and strategic investigation. We were able to uncover a clear pattern of lies and manipulation by a witness. Innocent man exonerated and a career saved.

All charges dropped in armed robbery case at Joint Base Elmendorf Richardson, Anchorage, Alaska. Attorney Younts’ adept use of pre-trial motions and independent investigation convinced the court that there was no evidence to support the fabricated allegations and an Army Specialist was cleared of all charges.

NCO wrongfully accused of false statements and larceny involving alleged BAH fraud was acquitted by an officer panel. Attorney Younts’ used the testimony of expert witnesses, in -depth knowledge of the Joint Travel Regulation, and a compelling closing argument to achieve complete victory for our client and his family.

Not Guilty verdict at Ramstien Air Base, Germany. Air Force Lieutenant Colonel acquitted of false allegation of sexual assault. During cross-examination by Attorney Younts the complaining witness admitted that she did not believe she had been sexually assaulted and felt forced into making the allegation by Air Force officials.

Female Army NCO was found not guilty of all charges related to alleged cruelty, maltreatment, and dereliction of duty. Attorney Younts’ successfully argued that our client was an outstanding NCO with high standards and the allegations stemmed from an attempt by Soldiers to hide their own substandard performance by making false claims of misconduct.

Full acquittal in alleged child sexual assault case at Joint Base San Antonio, Texas. Attorney Younts successfully proved the innocence of an E-6 who was wrongfully accused of molesting two girls. Attorney Younts left no stone unturned and discovered that the girls had fabricated the story based on the plot of a television show.

Attorney Younts successfully represented an Army Major facing a Board of Inquiry and the possible end of his career. Through relentless investigation and a thorough knowledge of Army Regulations attorney Younts was able to demonstrate that an allegation of misconduct was false. The result was a career saved.

An Army Specialist facing life in prison was fully acquitted of multiple charges including rape, sexual assault, and obstruction of justice. A combination of strategy, preparation, and courtroom advocacy resulted in the pre-trial dismissal of multiple charges and a finding of not guilty on all remaining charges.

Army SGT found not guilty of all charges in a case involving allegations of drug abuse. Despite a positive urinalysis test, Attorney Younts’ in-depth understanding of military drug testing and forensic toxicology enabled the defense team to prove that the use was accidental. The result was a not guilty verdict and an NCO’s career was saved.

RECOGNIZED AS AN OUTSTANDING MILITARY ATTORNEY

As a JAG officer, R. Davis Younts served as a prosecutor, a defense attorney, a command legal advisor, and a senior legal advisor to deployed commanders and general officers. He has served as the Chief of the Military Justice Division at the Air Force JAG School. R. Davis Younts is the recipient of an Air Force Meritorious Service Medal and an Air Force Commendation Medal, and he was ranked as the number one Senior Defense Counsel in the Air Force.

R. Davis Younts combines the skills of an award-winning trial attorney with his experience as a military officer to provide a thoughtful and strategic defense to active duty service members accused of crimes. If you are charged with violating the Uniform Code of Military Justice, or if you need a discharge upgrade or need to have your military record corrected, reach out to military defense attorney R. Davis Younts – without delay.

Davis took the time to fight on my behalf against a military chain of command that was out of control. They did everything in their power to destroy my career...

I met Mr. Younts at Travis AFB in 2019. He was very professional and passionate about his job. Through very hard work and diligence, he masterfully defended ...

Our families and I want to thank you for everything you have done to save [our son] from a possible life sentence. Please continue what you are doing and fight...

Attorney R. Davis Younts is a 1999 graduate of Liberty University, and he earned his J.D. in 2002 from the Dickinson School of Law at Pennsylvania State University. He is a recipient of the Association of Trial Lawyers of America Trial Advocacy Award, and he is admitted to practice in military courts, Pennsylvania courts, and in the U.S. District Courts for the Middle and Western Districts of Pennsylvania.

After a decade of military service, Attorney R. Davis Younts continues to fight for freedom – your freedom under the U.S. Constitution – and for the rights of active duty service members, veterans, and civilians who face criminal charges or simply need candid, trustworthy legal advice. If you are accused of a crime, he will review the charge against you, craft an effective strategy for your defense, advocate aggressively for the justice you deserve, and bring your legal matter to its best possible outcome. 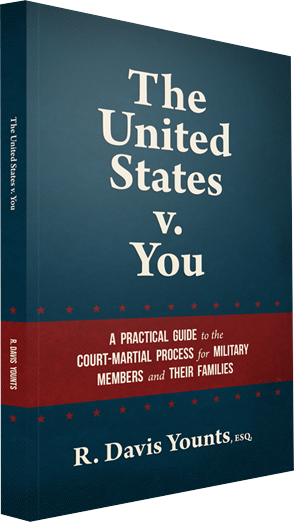 The United States V. You

The Common-wealth
V. You

Criminal and military defense attorney R. Davis Younts believes that every citizen should be treated equally under the law and that every defendant has the right to receive a fair trial. A conviction on a criminal charge can drain your resources, threaten your freedom, and make life difficult for years into the future. Whether you’re guilty of the charge or completely innocent, you must have a defense attorney who knows the system and who knows what it takes to win justice.

We are located off of Market St, east from N Twelfth St. Our office is only a block away from the Capital Area Transfer Lemoyne Station, and it is within walking distance of the Susquehanna River. During regular traffic conditions, you can expect a car ride from the Capital City Airport to take you about 10 minutes. If you need any special assistance finding our office, you can always give us a call at: (717) 612-4840.